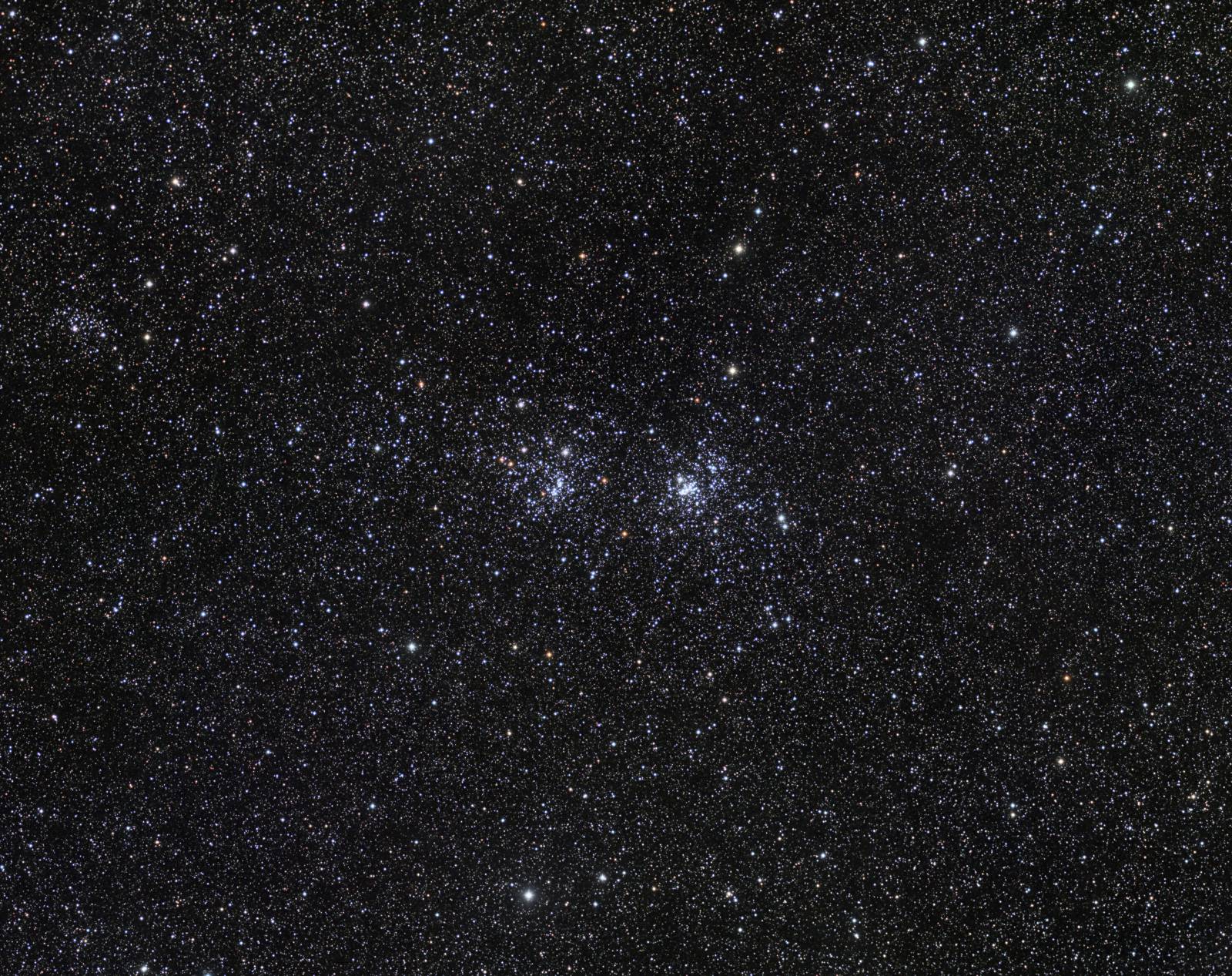 The Double Cluster includes NGC869 (right) and NGC884, (known as h- and Chi-Pereus, respectively), each comprising hundreds of stars. Both clusters are about 13 million years old (compared to 75-150 million years for the Pleiades). They lie about 7,500 light years away and a few hundred light years apart, and have a combined mass of about 6,500 times the mass of our Sun.  However, the clusters have a halo totalling more than 20,000 solar masses and each contains more than 300 blue giant stars. The clusters are moving  towards us at a speed of about 40 km/s.

These clusters were bright enough to get star designations, and are both visible to the naked eye as foggy patches in a dark sky not far below the “left” side of the “W” of Cassiopeia in an autumn sky. Some people refer to them as the handle of Perseus’ sword. In binoculars this pair looks like salt sprinkled in two little piles on a black tablecloth. In a small telescope the view is wonderful. Large telescopes reveal more stars, but tend to have too small a field to show the whole thing at once.  In this case, I used my current setup to get a very wide field view that includes a couple of overlooked objects:  open cluster NGC 957 is on the left side of the field, and dark nebula B201 is the relatively star-free triangle-shaped region to the right of the Double Cluster.

I used no restraint in making the gazillions of stars in this region visible. The Double Cluster lies in the winter Milky Way.  My image from 2015 using a 10″ reflector shows the Double Cluster at higher resolution.

Pre-Processing
The BatchPreProcessing script was used to perform calibration, cosmetic correction and registration of all frames. ImageIntegration was used to make R, G and B masters.

RGB Creation
Creation and cleanup:  R, G and B were combined to make an RGB image which was cropped to remove edge artifacts. DynamicBackgroundExtraction was applied, followed by PhotometricColorCalibration.

Stretching:  ArcsinhStretch was applied to start the stretch while preserving saturation in the stars. HistogramTransformation was then applied to the RGB image to make a pleasing, bright image. The Repaired HSV Separation script was used to even the star colour throughout the cores of bright stars.

Stretching:  HistogramTransformation was applied to to make a pleasing, bright image.

Noise Reduction and Re-Stretch: TGVDenoise was applied in L*a*b* mode with 300 iterations with a range mask applied to protect stars. HistogramTransformation was then applied to raise the black point, darkening the background slightly (but with no clipping).