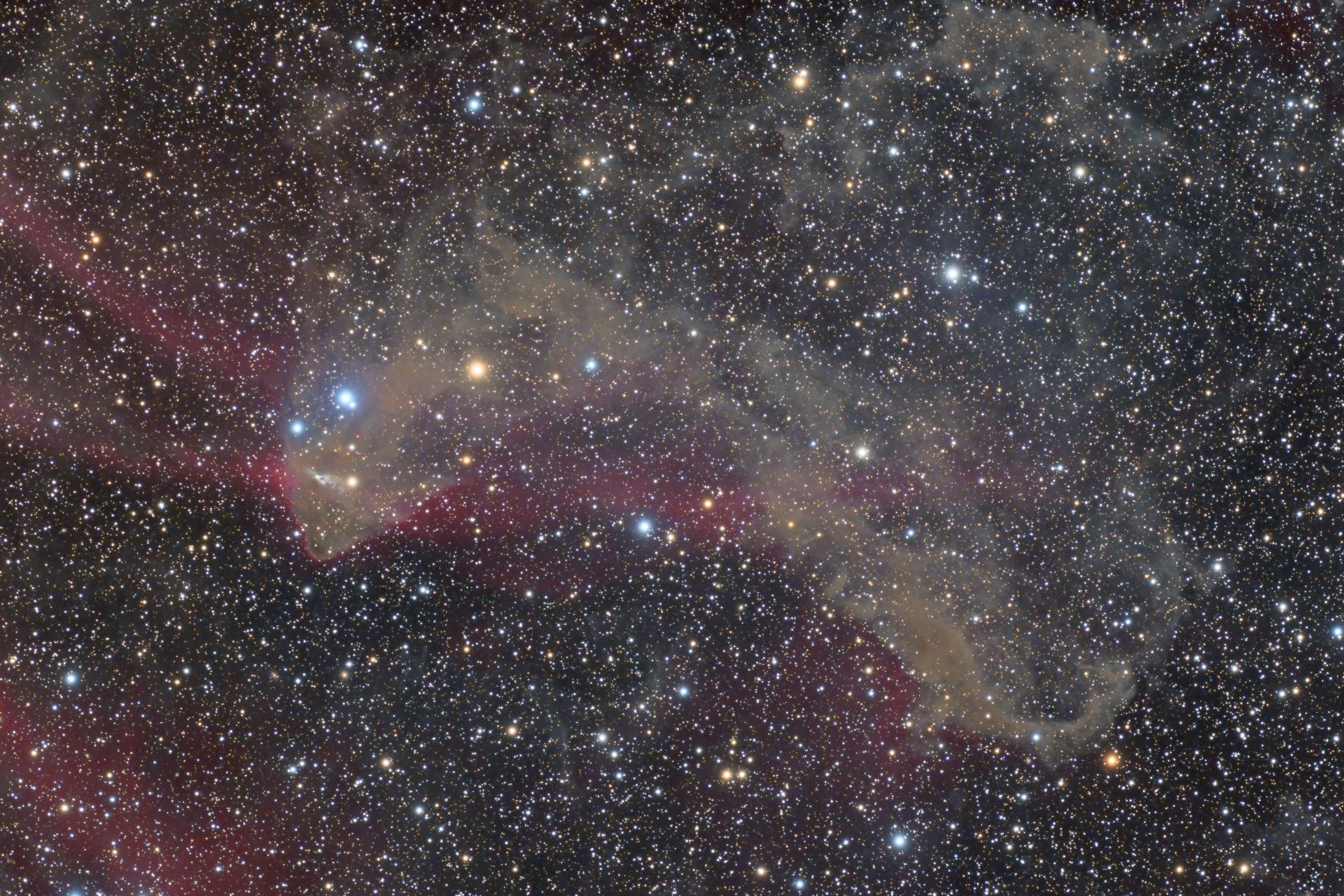 LBN 437 is a complex nebula in Lacerta, the Lizard. In keeping with the reptilan theme, LBN 437 looks to me like a gecko seen from above. However, Gail says it is more amphibian in nature, resembling this petrified toad poo we found in our driveway. You be the judge; I’m going with gecko.

I had originally planned to shoot only broadband (“natural” colour), but when I saw the faint red glow of Sh2-126 in the first few frames, I decided to get some H-alpha data to better reveal the dim red structures in the region, including the edge of the “snout,” which looks like a shock wave. This structure was very clear in the H-alpha image. The acronym “LBN” refers to Lynd’s Catalogue of Bright Nebulae. This catalogue’s entries were identified by inspection of red and blue images from the National Geographic – Palomar Observatory Sky Atlas.

Tekkies:
Acquisition, focusing, and control of Paramount MX mount with N.I.N.A., TheSkyX and PHD2. Focus with Optec DirectSync motor and controller. Equipment control with PrimaLuce Labs Eagle 4 Pro computer. All pre-processing and processing in PixInsight. Acquired from my SkyShed in Guelph. AVerage or better transparency and seeing. Data acquired September 6-24, 2021.

Data Reduction and Initial Processing
Preprocessing: The WeightedBatchPreProcessing script was used to create Luminance and H-alpha master frames from the mono camera and an RGB master frame from the one-shot colour camera. DrizzleIntegration (2x CFA Drizzle) was applied to the RGB set. The RGB master was registered to the Luminance master using StarAlignment.

Deconvolution:  A star mask was made from the Luminance master to use as a Local Deringing Support Image. The GAME script was used to make a mask selecting only two galaxies and one other region for deconvolution. Deconvolution was applied (30 iterations, regularized Richardson-Lucy, ParametricPSF mode with default settings; Global dark deringing = 0.03; Global bright deringing 0.005).

Sharpening: MultiscaleLinearTransform was used to sharpen Layers 2 and 3 with strengths of 0.1and 0.05, respectively. The mask used for deconvolution was used to limit sharpening to a few specific regions of the image.