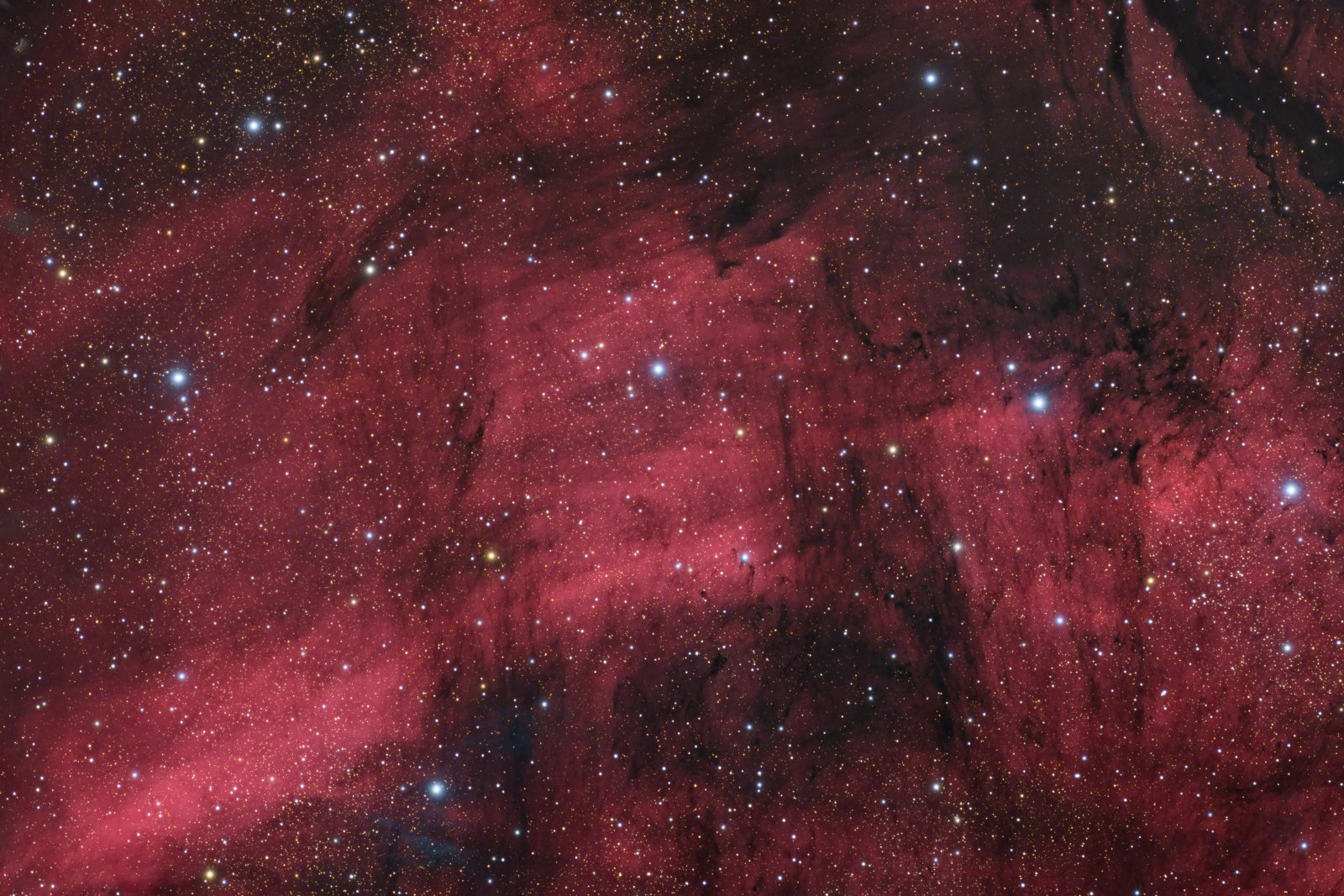 IC 5068 lies “beneath” the Pelican nebula. Both can be seen together in wide field images.  IC 5068 looks like a parallelogram with diagonal extensions at bottom left and top right.  Like the other patches of glowing gas in this region, this nebula lies around 1,600 light years away, and glows in red wavelengths due to emissions from hydrogen atoms. There are also several other objects in the field which are identified in an annotated image.

To create this photo I blended the light collected through two telescopes. A smaller telescope (4″ refractor) was used to capture relatively low resolution one-shot colour, and a larger telescope (6″ refractor) and monochrome camera were used to collect higher resolution Luminance. An H-alpha filter was used with the high resolution setup to capture the mainly red light of hydrogen in this region. For comparison, check out my previously-posted close-ups of IC 5068, including H-alpha only, in black-and-white.

Data Reduction and Initial Processing
Preprocessing: The WeightedBatchPreProcessing script was used to create Luminance and H-alpha master frames from the mono camera and an RGB master frame from the one-shot colour camera. DrizzleIntegration (2x CFA Drizzle) was applied to the RGB set. The RGB master was registered to the Luminance master using StarAlignment.

Deconvolution:  A star mask was made from the Luminance master to use as a Local Deringing Support Image. A stretched clone of the H-alpha image was used to make a mask selecting bright regions of the nebula for deconvolution. Deconvolution was applied (30 iterations, regularized Richardson-Lucy, ParametricPSF mode with default settings; Global dark deringing = 0.02; Global bright deringing 0.007).

Sharpening: MultiscaleLinearTransform was used to sharpen Layers 2 and 3 with strengths of 0.2 and 0.13, respectively. A mask was made by subtracting a star mask from the mask used for deconvolution. This was used to limit sharpening to a few specific regions of the image, while avoiding sharpening the stars.

Final Steps: MorphologicalTransformation was applied (morphological selection=0.11; strength =1; 9×9 kernel, circular structure) through a star mask to slightly reduce the size of the largest stars. The DarkStructureEnhance script was applied with a strength of 0.2. Background, nebula and star brightness, contrast and saturation were adjusted in several iterations using CurvesTransformation with masks as required. ICCProfileTransformation (sRGB IEC61966-2.1; Relative Colorimetric with black point compensation) was applied prior to saving as a jpg.