Skip to content
Previous Next
M104, The Sombrero Galaxy 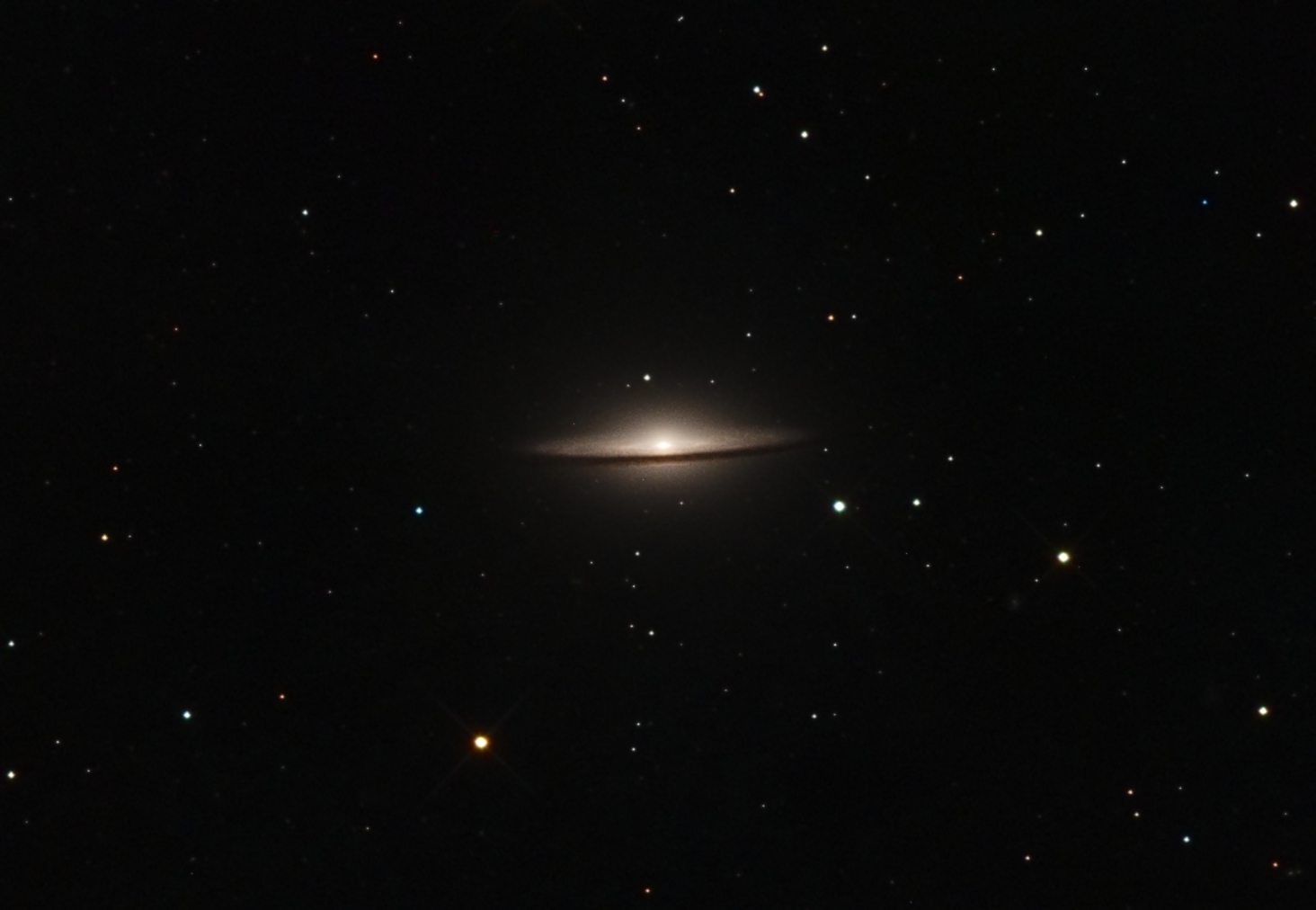 The Sombrero galaxy is in the southern sky from my 43 degree north latitude, in the constellation Corvus, the Crow. It’s a large spiral galaxy and shows a prominent dark lane of dust and cold gas. It has a very prominent (unusually so) and large central bulge, Research in the 1990s showed that this galaxy has a supermassive black hole at its centre — the research showed that the structure of this galaxy depends upon a mass of at least a billion suns at its centre. The Sombrero galaxy lies around 23 million light years away.

This was interesting to image.  The colour information was acquired in 2011 with a different telescope, camera and mount than the luminance (brightness) data, which was acquired in May 2014.

RGB: 6x5m in R, G and B acquired Binned 2×2 (total 90m) using an 8″ f/8 RC on a MI-250 mount, from my SkyShed in Guelph in May 2011. Crescent moon no cloud, average transparency and below average seeing. MaximDL was used for acquisition and guiding. 5x20m light frames on QSI583wsg. Calibrated, aligned stacked and colour-combined in MaximDL with 9 darks, 20 flats and 9 bias frames. Guided with QHY5 through off-axis guider port on QSI camera.

The R, G, B and both L files (5 and 15m subs) produced in MaximDL were each background-corrected with DynamicBackgroundExtraction, registered and cropped. R, G and B were combined into an RGB image and colour calibration applied and stretched using HistogramTransformation followed by ColorSaturation. The two L images were combined with HDRCombination. The resulting HDR image was processed with deconvolution (using a custom PSF made from DynamicPSF command) and stretched with HistogramTransformation. ACDNR noise reduction was applied with a radius of 0.5 px to remove small scale noise. Luminance was extracted from the RGB image, matched to the L image with LinearFit, and then added back into the RGB image using Channel Combine in the Lab space. LRGB Combine was used to add Luminance to the RGB image, and contrast and colour saturation were adjusted using Curves. The size of bright stars was reduced with MorphologicalTransformation. Image scale is about 1.1 arc sec per pixel.