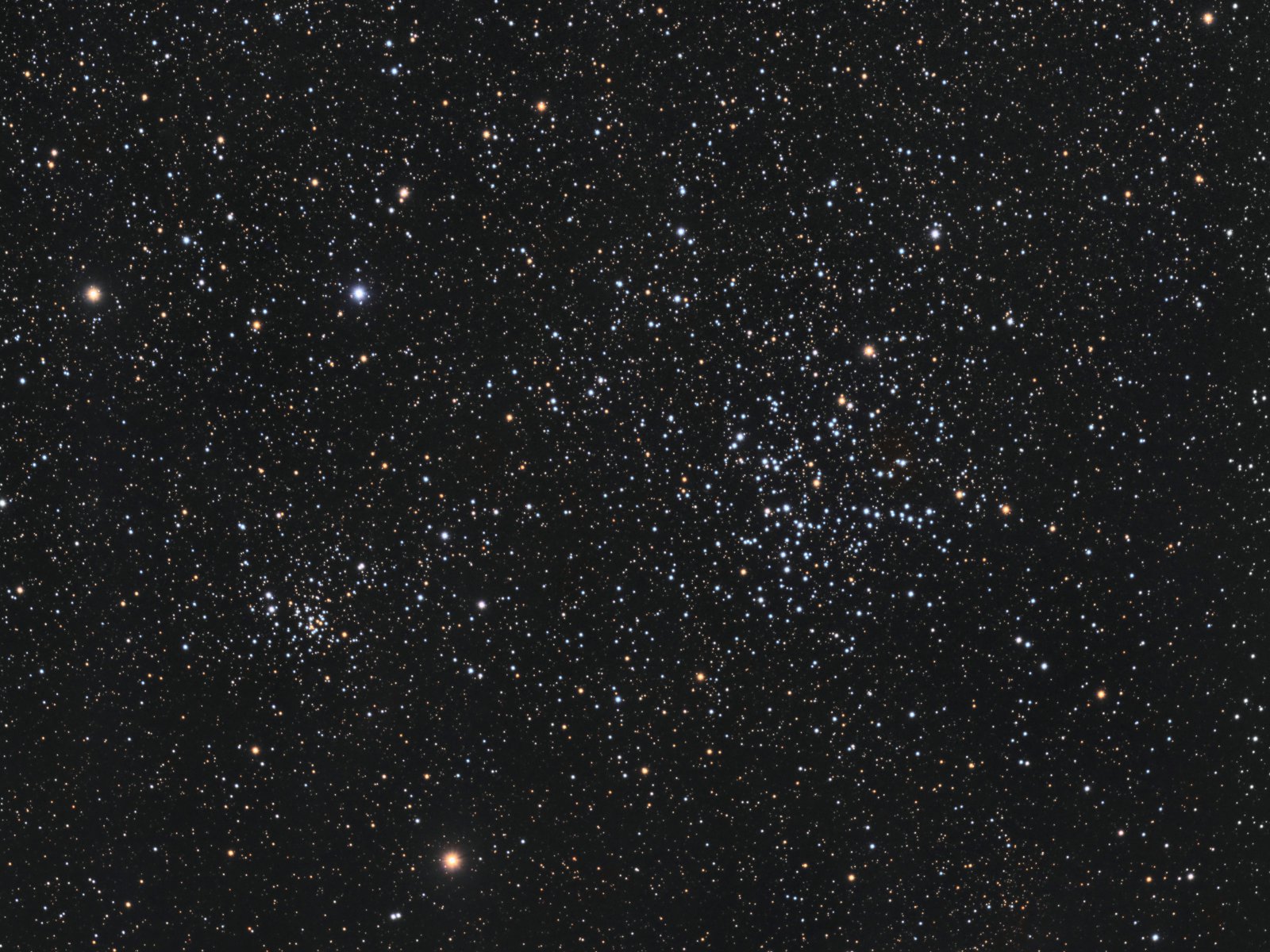 M38 (right) and NGC 1907 are both in Auriga, which is chock-full of open clusters and nebulae.  M36, M37 and M38 are all at about the same distance — around 3,480 to 4,500 light years — and close to each other on the sky. M38 is about 21 light years across and about 290 million years old. NGC 1907 was formed in a different part of the galaxy and is probably moving past M38 at about 4,500 light years. It is much older than M38, at about 500 million years of age. I am aware that there is some nebulosity around NGC 1907, but shooting with a big Moon in the sky meant this didn’t show through in this image. A previous version of M38 at higher resolution is here, although I think I prefer the current image to the older one.

For part of this acquisition, I was testing a new prototype Optec focuser for my Sky-Watcher Esprit 150. I’ve used several of their focus products before and all performed flawlessly. This new prototype was no exception.

Data Reduction and Cleanup
The BatchPreProcessing script was used to perform calibration, cosmetic correction and registration of all frames. ImageIntegration was used to make the R, G and B masters. DynamicCrop was used to crop all the masters identically. DynamicBackgroundExtraction was applied to each master twice, with Division followed by Subtraction.

Stretching: MaskedStretch followed by CurvesTransformation was applied to make a pleasing, bright image, with background set to an intensity of approximately 0.08.

Creation: R, G and B masters were combined using ImageIntegration (average, weighted for noise, no clipping).

Combining Luminance and RGB
LRGB Combination: The SynthL was applied to the RGB image using LRGBCombine with default settings.

Additional Processing
Nonlinear Noise Reduction: TGVDenoise was used in L*a*b* mode to reduce noise with a mask to target the background and protect the stars (max. 1000 iterations and convergence selected for both luminance and chrominance).

Final Steps: Background and star brightness, contrast, and saturation were adjusted in several iterations using CurvesTransformation with masks as required.