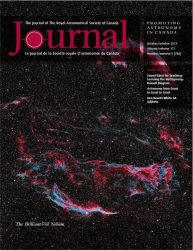 This image shows the entire Veil Nebula, a supernova remnant in Cygnus the Swan. The Veil Nebula complex is huge, covering about 7 moon widths on the sky.  It is so large that it is difficult to capture the whole thing at once, so all my previous images of this region have focused on individual portions (also see annotated image):

The supernova that created the Veil Nebula happened between 5000-8000 years ago and the nebula has been expanding ever since.  The glowing gas is mostly hydrogen and sulphur (red) and oxygen (teal) whose atoms are being excited by the pressure waves created by the massive explosion of the progenitor star, which was about 1,470 light years from Earth.

The brightest parts of the Veil are visible in modest amateur equipment in a dark sky, especially with an Oxygen-3 (O3) filter, which dramatically enhances contrast. It’s well placed high in the sky in late summer and autumn in the northern hemisphere. The bright star at right in the image, 52-Cygni, is visible with the naked eye and is helpful for finding the nebula. The field is crowded with stars because the nebula lies at the edge of the summer Milky Way.

Moravian G3-16200 EC camera (on loan from O’Telescope), Optolong Ha, O3, R, G and B filters, Takahashi FSQ-106 ED IV at f/3.6, Paramount MX, unguided. Acquisition with the SkyX, focused with FocusMax. All pre-processing and processing in PixInsight. Acquired from my SkyShed in Guelph. Gibbous to full moon for Ha and O3, new to crescent moon for RGB. Average or better transparency and poor to average seeing. Acquired June 8-July 19, 2017.

NB-RGB Creation
Creation and cleanup:  The BatchPreProcessing script was used to perform calibration, cosmetic correction and registration of all frames. DrizzleIntegration was used to make the channel masters. The R, G, B, Ha and O3 masters were cropped to remove edge artifacts and DynamicBackgroundExtraction was applied to each. R, G and B were combined to make an RGB image which was processed with BackgroundNeutralization and ColorCalibration.

Luminance Processing
Immediately prior to stretching, RGBWorkingSpace was applied to the NB-RGB image with all channel weights set to 1. The Luminance was extracted and processed separately as follows:

Deconvolution:  A star mask was made to use as a local deringing support image. A copy of the image was stretched to use as a range mask. Deconvolution was applied (50 iterations, regularized Richardson-Lucy, external PSF made using DynamicPSF tool with about 20 stars).

Additional Processing
Contrast Enhancement: HDRMultiscaleTransform was applied to a copy of the image in Median mode (6 iterations) using a mask to protect stars and background. The resulting image was blended with the original 1:1 using PixelMath.

Final Steps: MultiscaleLinearTransform was used to sharpen the structures in the bright parts of the nebulae (layers 2-3 at 0.05). Background, nebula and star brightness, contrast and saturation were adjusted in several iterations using Curves with masks as required. SCNR was applied to background areas to reduce a slight green cast. The StarReduction script was applied to the image and the resulting image was blended with the original 1:1. The image was downsampled by a factor of 2 to the original camera resolution to keep file size manageable for web display.