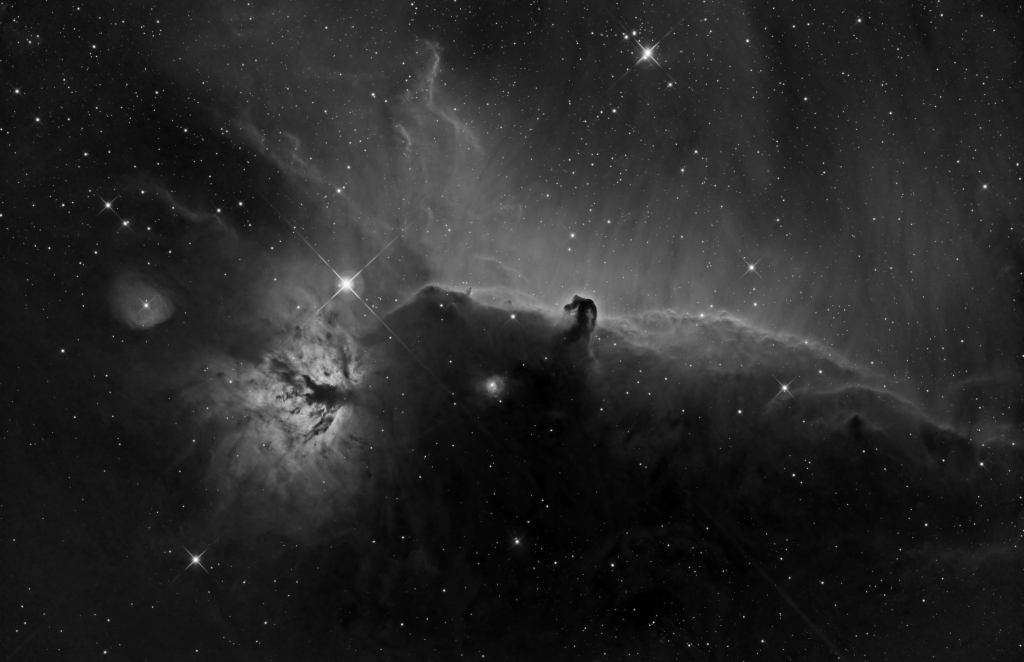 I acquired this image over the last month, shooting through a deep red (Hydrogen alpha, also called Ha or H-alpha)) filter when the moon was out.  I also made a colour version using this H-alpha data.  This region is part of a much bigger complex of nebulosity and star formation in Orion, known as the Orion Molecular Complex.  There’s a lot going on in this part of the sky, so I was able to include several beautiful objects in this image:

– The brightest star in this image is Alnitak, the leftmost star in Orion’s belt, as seen from the northern hemisphere.  It’s more than 700 light years away, and is a triple star, whose brightest member is a hot blue supergiant.

– The Flame Nebula is below and a bit to the left of Alnitak, which powers this emission nebula.  Electrons in the gas get energized by ultraviolet light and release the energy as visible light.  The dark areas are made of dark gas and dust lying between us and the bright part of the nebula.

– Right of the flame and to the lower left of the horsehead is NGC2023 (NGC is the revised New General Catalogue), a bluish reflection nebula (this looks better in the colour version, in my opinion).  It also contains pinkish areas in it are due to ultraviolet light causing molecular hydrogen to fluoresce, and the colour is quite different than the deep red usually associated with hydrogen.  In fact,  Reflection nebulae do not glow with their own light, they are due to dust and gas reflecting starlight towards us.

– Near bottom centre is another whispy reflection nebula, IC435.  (IC stands for “Index Catalogue” and are supplements to the NGC.  There are 2 volumes of IC objects).

The individual Ha frames were calibrated, registered and combined in Maxim DL and then background-corrected with DynamicBackgroundExtraction in PixInsight.  The image was then cropped to remove edge artifacts and processed with deconvolution and histogram transformation.  HDRMultiscaleTransform was used at 6 and 4 pixel scales on the bright parts of the image (with stars protected by masking).  TGV noise reduction was applied to remove fine scale noise. LocalHistogramEqualization was applied to the brightest areas, followed by a mild unsharp mask.  Contrast was adjusted using curves.  Image scale is about 2.1 arc sec per pixel.